Coupled Atmosphere-Ocean Modeling
Climate Models
​​Global atmosphere-ocean models are an invaluable tool to study climate variability and change. However, as models become increasingly complex, efforts focused on the processes within the models become vital to accurately characterize and understand the simulated variability. We use a hierarchy of complex climate models to study the relative roles of the ocean, atmosphere, and different air-sea processes in driving climate variations.

Mechanically Decoupled CESM
We use a mechanically decoupled (MD) version of the Community Earth System Model (CESM) to confront the following question: What are the relative roles of winds versus buoyancy in driving ocean and climate variability? The MD model allows us to observe climate variations that are only due to changes in buoyancy (exchanges of heat and freshwater) between the atmosphere ocean. Recently, we have used the combination of the MD model and a fully coupled version of the same model to show that the role of wind-driven Ekman advection in driving sea surface temperature (SST) variability is very different in the subtropics versus midlatitudes (Larson, Vimont, Clement, Kirtman 2018 J. Climate) and to isolate the buoyancy-driven Atlantic Meridional Overturning Circulation (Larson, Buckley, Clement, 2020 J. Climate).

Climate Prediction & Predictability
​
​El Nino - Southern Oscillation (ENSO)
Variations in sea surface temperature (SST) in the tropics can alter weather patterns across the globe, generating recognizable changes in surface climate and atmospheric circulation.  Year-to-year fluctuations in SST in the tropical Pacific associated with the El Nino - Southern Oscillation (ENSO), drive changes in tropical cyclone activity, temperature and precipitation over North America, and alters the odds of experiencing droughts and floods. The severity of these far-reaching climate effects, or teleconnections, often depends on whether the eastern equatorial Pacific SST are unusually warm or cold and by how much. That said, El Nino (warmer than usual SST) and La Nina (colder) events are not polar opposites, leaving much to be understood about what drives the amplitude of El Nino and La Nina events. Our recent work shows that the buildup of heat content in the subsurface equatorial Pacific Ocean prior to ENSO events is only fundamentally important in generating extreme El Nino events. So, are El Nino and La Nina fundamentally different? What other factors influence the amplitude of ENSO events? We design climate model ensemble experiments to confront these questions.
Questions of interest include:
Extratropical & Tropical Climate Variability
​Subtropical-to-Tropical Interactions
Tropical SST variability, although primarily driven by ENSO, has been shown to be indirectly and directly influenced by subtropical thermally coupled modes of variability. For instance, one possibility for why certain ENSO events are stronger than others is that climate variability in the subtropics may influence the amplitude of ENSO events. Variability in both the north and south subtropical Pacific Ocean are linked to ENSO variability along the equator. As one example, our recent work argues that latent heat flux variability associated with the South Pacific Meridional Mode (SPMM), a coupled atmosphere-SST mode of variability in the southeast Pacific, influences the amplitude of ENSO events by modulating the latent heat flux damping of a coincident ENSO event. This is distinctly different from a prior hypothesis that the SPMM acts as a wind stress trigger that excites ENSO events themselves. Therefore, if the SPMM is in a warm phase, El Nino events may grow stronger than if SPMM is neutral or in a cold phase. 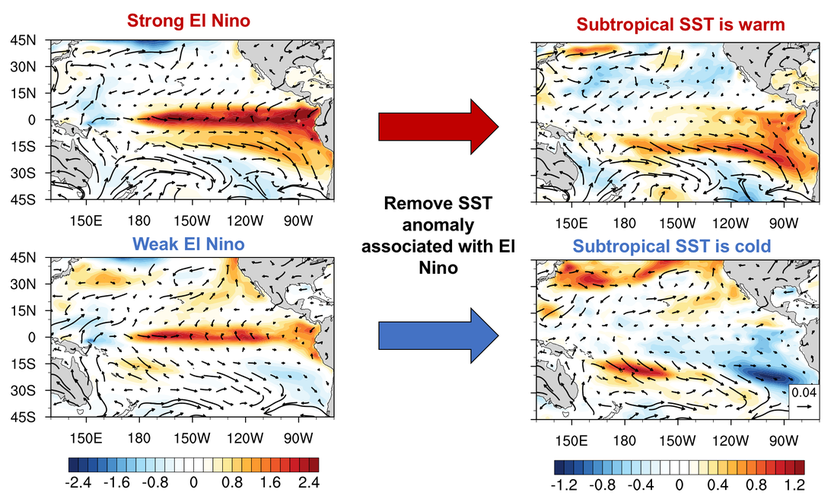